Chris Schmidt, Chief Product Officer and Jeff Chen, CEO
Materials deliveries are a critical part of every construction project. And yet, a large majority of general contractors still rely on whiteboards and paper to coordinate the deliveries of their trade partners. For large projects with over 30 trades on-site, this formula is bound to fail according to Jeff Chen, CEO of StruxHub.

“Just look at the long truck queues outside of jobsites. Or the tired superintendents spending their mornings breaking up fights between trades. It’s exhausting and inefficient. And it’s happening everywhere,” says Chen.

Before launching StruxHub in 2019, Chen and co-founder Chris Schmidt, StruxHub’s Chief Product Officer, repeatedly saw this pattern. They were convinced that general contractors simply didn’t have the right tools to manage high volume and dynamic workflow like materials deliveries. 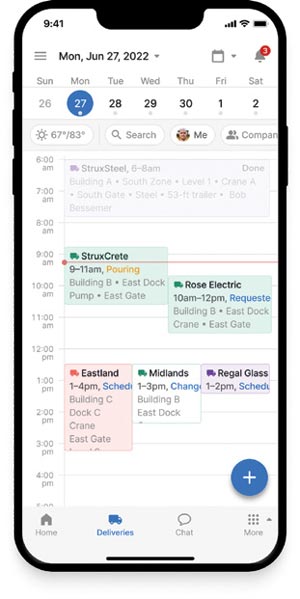 “Foreman are spending over 50% of their day scheduling or verifying—especially regarding logistics. Can I reschedule a delivery? Is the hoist free? Where are crews working today? One of our goals in StruxHub was to make these interactions redundant,” notes Chen.

StruxHub is a jobsite management platform that prides itself on being uber field-centric.

Schmidt states, “Everything we build in StruxHub aims to make the lives of Superintendents easier. It’s about facilitating collaboration of trades with minimal intervention and maximum control by the general contractor.”

Guided by this vision, StruxHub has crafted a platform around the daily workflows between the general contractor and its trade partners (Fig. 1). There are 4 apps that work independently or in tandem.

One of the hallmarks of StruxHub is its emphasis on site logistics.

For example, users can upload their pdf site plans in StruxHub and turn them into geo-referenced maps (i.e., where every point can be related to a longitude and latitude coordinate). In deliveries, this means precise coordinates of site entry gates can be sent to drivers.

Maps also display live workflows. In deliveries, on-site trucks can be visualized at offloading zones.
In permits, hot-work areas can be seen on floor plans to communicate hazards. In activities, users can see where crews are working in buildings.

General contractors get additional control over their site too. For example, admins can program logistics rules in the delivery request form so that drivers are routed only along permitted paths. Supers can also close resources on-the-fly and instantly notify affected trades and suppliers.

StruxHub has helped top general contractors on a wide range of large projects such as commercial/residential high-rises, hospitals, campuses, and airports.
Several benefits can be seen in these projects.

• Field teams consistently adopt StruxHub. The intuitive user interface and the personal onboarding of projects makes it easy for projects to roll-out StruxHub. For example, in a Turner high-rise project in Philadelphia, the project team was able to roll out StruxHub to their trades in only a week after the initial demo. Within several months, over 170 monthly bookings were being recorded for 32 on-site trades.

• Field teams save time. With the logistics rules programmed into the delivery request forms, there are less conflicts.

Project engineers who are tasked at coordinating deliveries are saving 4–8 hours per week. Field teams also see a 50% drop in time spent in directing on-site traffic.

• Trades schedule deliveries earlier. With the ease of scheduling recurring deliveries, trades are booking well in advance. Median values for the number of days between the initial request date and the delivery date range from 4–14 days. This is a marked improvement over typical deliveries that show up unscheduled on a site.

• Improved safety communication. In a successful implementation at San Francisco International airport, the upper management of the general contractor was impressed with how StruxHub was able to communicate safety procedures to suppliers and get drivers to consistently follow routes for landside and airside deliveries. This led to an overall safer site.

From its inception, StruxHub has aimed to make it easy for projects to connect their project data—e.g., schedules, plans, trades—and inject them into actionable workflows in the field.

In the future, StruxHub hopes to enrich this formula with other data sources.

For example, StruxHub believes there is a great opportunity in integrating materials supplier data. In the integration with Holcim’s Concrete Direct—a concrete ordering app—Chen states:

“We can take the telemetry data from the concrete trucks and then communicate them to the entire project team on live StruxHub sitemaps. In return, concrete drivers get detailed sitemaps so they know exactly where to go. It’s a win-win for everyone.”

As it grows its ecosystem, StruxHub hopes to make deeper connections with the construction supply chain, with the ultimate objective of helping the industry build more efficiently and sustainably together.

I contacted StruxHub to help us with a complex project in the Northeast US region. It involved multiple buildings in a large site work package.

We worked closely with the StruxHub team. They helped us customize the app by pinpointing delivery locations on site plans and by building logistics rules.

This allowed us to view our delivery data on a live site plan versus just a calendar and spreadsheet. It also gave us dynamic control of the site with the ability to make logistics changes on-the-fly and communicate them to subcontractors.

StruxHub is a valuable program. In the end, it allowed us to successfully coordinate materials deliveries and site logistics between the various teams. 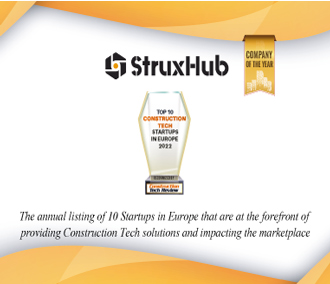