Impact Housing: Addressing the Crisis of Affordable Housing through Innovation

E very crisis also represents an opportunity. The crisis of affordable housing is no different. The main culprit of the housing crisis is construction costs that continue to rise much faster than the incomes of potential residents, thereby putting housing increasingly out of reach for the Missing Middle––the men and women who do the heavy lifting in our country and really make the country work. Construction costs have risen because of rising labor costs. Labor costs are not going to decline because the labor force has been hollowing itself out for more than a decade; and not replacing itself with younger workers. The decreasing supply of construction workers inevitably leads to higher construction costs; and so it has. In nearly every area of the country, construction labor costs have become so high that developers can build housing only for the top 1 percent of the market, leaving the rest of the market to fend for itself.

The opportunity within the housing crisis is to provide an alternative to site-built housing, which is so completely dependent upon the availability and reliability of such costly labor. The alternative is volumetric modular construction.


Atlanta-based Impact Housing Group has adopted volumetric modular construction as the housing delivery system to address the affordable housing crisis in the US.

As part of that strategy, Impact Housing has become a fully-integrated, onestop shop to provide housing that people can afford. One-stop shop means Impact’s customers have only one negotiation for the manufacture, delivery, set, and site work. Otherwise, a prospective customer for volumetric modular housing would have four separate negotiations manufacture, transportation, crane/set, and site work. The prospect of negotiating and coordinating four separate vendors is too intimidating and inefficient to be attractive or scalable. 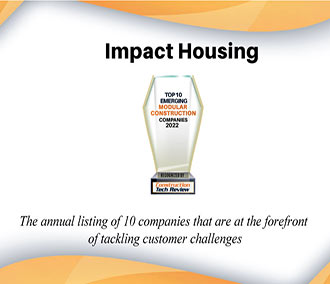